As much as I hate to admit it, April felt quite unproductive compared to the busy month I had in March. Maybe it was the visit from my parents, the days spent celebrating Henry’s birthday, or the spontaneous appearance of some warm summer weather, but they days that I had booked off work to focus on my illustration seemed to pass much more often paddling in the sea than sat at my desk, (no, I’m definitely not complaining.) I had hoped that I’d be able to set aside some time to work on a few more products for my Etsy shop this month; Unfortunately, however the greetings cards I’ve been working on were put on the back burner as other work became a priority.

However, the reason I wanted to start writing these monthly updates in the first place was to remind myself that even when I feel like I’m not achieving anything, that doesn’t mean I’m actually not achieving anything. So instead of wallowing in self pity at the things I haven’t done yet, here is a few bits that I did get done in April.

Releasing My Earring Collection on Etsy;

After weeks of redesigning the packaging, taking product photos, and just general faffing, my latest collection of earrings have finally made their way onto Etsy. 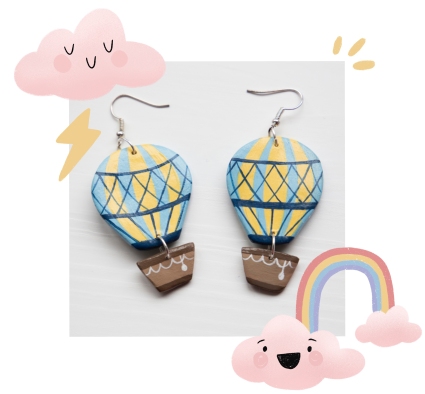 As well as actually making the earrings, a top priority for me before these new earrings went on sale was to find the the perfect, plastic free alternative to the scraps of bubble wrap that I was previously using, which obviously lead to countless hours of researching. The jewellery boxes I finally settled on are from the Tiny Box Company and are entirely recyclable; even the squishy padding inside to protect the earring sets is a recycled eco-fibre, making this option much kinder to the planet. I also decided to splash out on getting a rubber stamp with my logo on it so the jewellery boxes can be personalised (and also because who doesn’t want a stamp with their name on it?) This, I’ve also decided, can be used to stamp all my orders that go out, and probably everything else that’s sitting on my desk at the time. 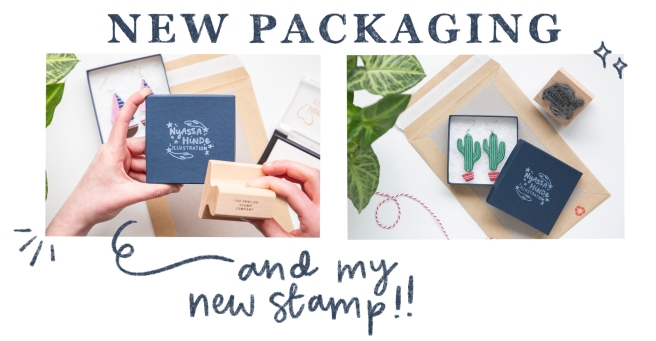 So, if you’re a fan of smiley-face-adorned objects or pastel colours then I definitely recommend a visit to my Etsy here where you can take a peek at the new one-of-a-kind designs while I still have stock left.

This logo design is something you might also remember from last months studio update, as I was mid-way through developing a colour palette when that post was uploaded, in time for it to finally be finished off at the beginning of April. After the initial sketches were sent off, the client very quickly narrowed the ideas down to those following, and from there, I was free to play around with colours that I thought would be appropriate. 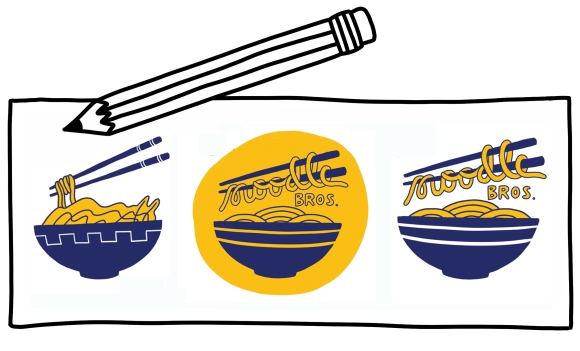 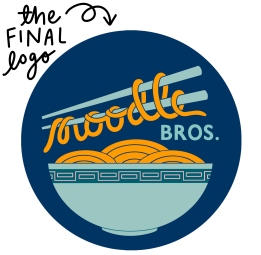 In the end, we stuck to a blue colour palette, with a very bright yellow noodles to contrast the darker background, and I was really pleased with the results. I mentioned before that I don’t often take on this kind of project, and I don’t really advertise that I offer logo designs, but it was nice to experiment a bit with the iPad that I bought myself for Christmas, and to work on a concept that is really different to what I normally create.

This is yet another project that has been a work-in-progress for a while now, but I finally managed to make a breakthrough in getting a big chunk of it done. I’ve been sketching and changing layouts and editing text placement since about October, but I finally have drafts for every single one of the double page spreads, and I even managed to squeeze in time to paint a spread too.

I’ve never ever painted the sea before, or waves, or a stormy sky, so to throw it all into one painting, scatter in some litter, and try to make it look good… needless to say it was a bit of a challenge. My opinions of how it turned out; not the best and not the worst. I did find it very tricky and if I were to do it again, there’s a lot I would do differently, but I’m very proud of myself for finishing, and also for only crying about it once, which is a pretty big achievement if you ask me.

So that’s it for artwork; it’s considerably less than all I managed to achieve in March, but I’m learning to accept that I can’t do everything all at once and that’s ok. I also have some very exciting projects in the works for May, and a million new product ideas for my little online shop, so I don’t think I’ll be running out of things to share any time soon.

I also made a lot of time for my own personal life this month. My parent’s and youngest brother made the long journey down to Falmouth for a few lovely, rainy days of sitting inside and wondering what to do in the bad weather. We did try and brave St Michael’s Mount in the wind, but the closest we got was admiring it from a local cafe with a bowl of chips, before opting instead for pottery painting at Star Glazers Cafe in Falmouth. 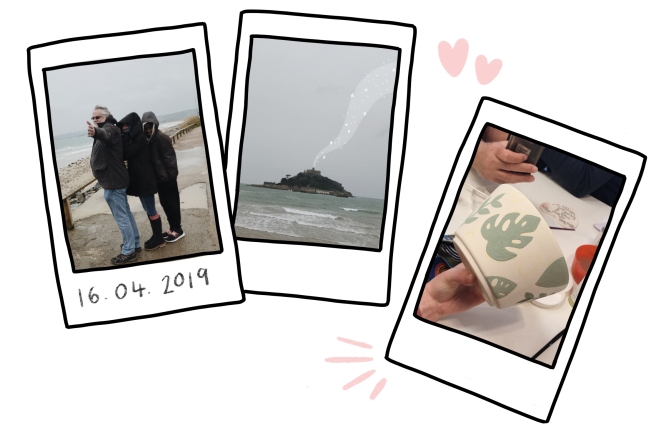 Obviously, as soon as my family headed back to Hertfordshire, the sunshine appeared and all I wanted to do was be outside. Me and Henry took our first dip in the sea this year (yes, obviously wearing wetsuits, we’re not insane), and we had our first BBQ on the beach – all very significant events in our very boring adult lives.

I hope you enjoyed this slightly quieter studio update, and if you’d like to be notified when I post again, don’t forget to follow (via the button at the bottom of this page.)

I'm Nyassa, an illustrator from Malawi, now living in Falmouth, Cornwall. I like the colour blue, patterned dungarees and drinking excessive amounts of coffee. And I really like dogs!    I try to make my work fun and energetic; I love bright colours and tiny details. I primarily use acrylic paint and add finishing touches digitally to create final pieces that are clean and coherant. I’ve also enjoyed experimenting with other practices such as Paper Cut and I love using bold typography to complement my work. Some of my favourite works have been illustrated maps, plans for children's narratives, and greetings card collections. When I'm not working on projects I'm probably making new things for my little online shop or getting lost in the Cornish coast. View all posts by nyassahinde